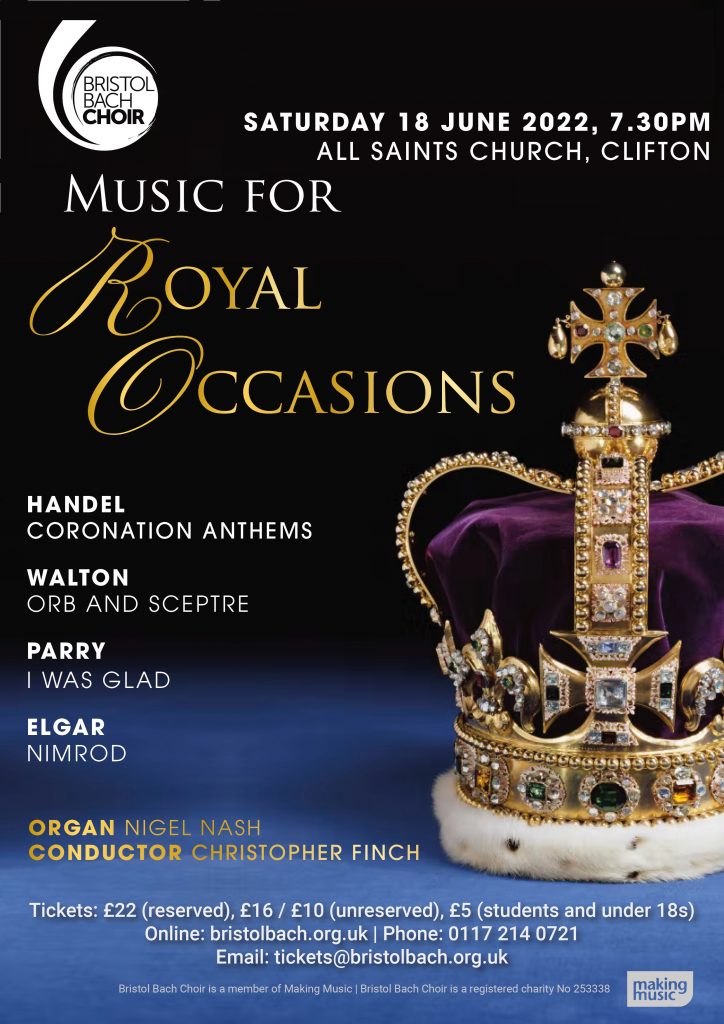 Our online Box Office has now closed and we will be happy to sell you tickets at the door. Should you wish to book in advance please contact us: [email protected]

Bristol Bach Choir celebrates Her Majesty The Queen’s Platinum Jubilee with a majestic concert of favourite choral works associated with the Royal Family.  Drawing on masterpieces performed at celebratory and solemn state occasions during the Queen’s life, the concert will feature works instantly familiar alongside the lesser-known.

Two of Handel’s great Coronation Anthems, Zadok the Priest and Let thy hand be strengthened will be performed alongside Parry’s ever-popular setting of I was glad.  Purcell’s melancholy but sublimely affecting setting of The Funeral Sentences provides a poignant juxtaposition.  Additionally music from many of the major royal weddings will be celebrated; including William McKie’s We wait for thy loving kindness written for the Queen’s marriage to Prince Philip, as well as William Mathias’s Let the People Praise thee and Paul Mealor’s Ubi Caritas, commissioned for the weddings of Prince Charles and Lady Diana, and Prince William and Kate Middleton respectively.  Our organist, Nigel Nash will additionally perform much loved works by British composers; including Orb and Sceptre by William Walton and Nimrod taken from the ‘Enigma Variations’ by Edward Elgar.